The F and EEb tubas are now in production. .730"/.750" 18" bell. Designed in Elkhart, built in China.
If Pop Johnson had built an F, this is what it would be like. (I wish I still had chops.)
The compact (3/4) BBb tuba is also in production.
I have one of each in Elkhart and would be pleased to have anyone stop in and test drive. (Call first.)
See pictures on link: New Instruments for 2012 and F Tuba Don Harry at Kleinhans Hall . Mark Jones posted his comments on Tubenet "AMAZING new piston F and Eb tubas!!!"
I will be taking them to Florida MEA, Capitol Tuba Conference (Army), Texas MEA, Ohio MEA, NAMMM (California) and some stops along the way.
The new compensating Euphoniums with the dual action trigger are on the way. I'll post pictures soon.
Donald R. Harry (via facebook)
The new Gemeinhardt tubas were brought to Buffalo, I had played the cc awhile back and loved it. I already own the Bb and will own the f. The intonation, response and above all depth of sound is excellent. The Eb is rock solid. Congratulations to Dick Barth. 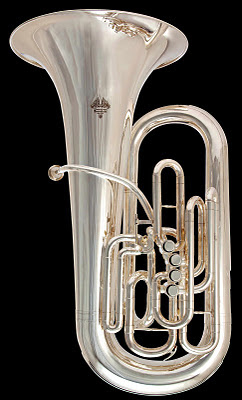 Developing new product: I’ve read with interest some comments on Tubenet and other places about the new Gemeinhardt tubas. I believe the instruments will speak for themselves if played. You will ultimately vote with your checkbook. But here is some history and some of the thought process: 1. The ‘Dependent’ Fifth valve. This is already controversial. I’m flattered. Why the Dependent Fifth Rotor: (I printed this as an additional page on the tuba fingering chart. Here it is with a few extra comments.) Some of the greatest players in tuba history played four valve tubas. There is an undeniable more open feel to the tuba without the addition of a fifth valve in the open horn. On the other hand there are some distinct advantages to having a fifth valve in the low register. The dependent fifth valve joins the advantages of both. The argument against the dependent fifth valve is the loss of an alternate fingering for the half step or whole step above the open second partial. There are other ways to deal with that one note. In fact many great tuba players have done so with four valve tubas. Some have opted for the automatic compensating system which requires very long valves and does not provide that alternate fingering. If the player agrees that the overall quality of the instrument is preferable without the fifth valve in the open bugle, the question is simply whether an alternate fingering for one note (two with compromise) outweighs the advantage of feel and sound on 47 other notes. Putting the valve in the large side of the main tuning slide as on Jake’s York means an extremely large rotor, significantly larger than the .812” rotor on the York. The F tuba would require a whopping .866” rotor. Big, sluggish and a significant interruption to the open horn. Putting it in the small side of the main tuning slide means taking 2” out of the tuning slide and still putting an interruption in the open bugle. Putting it ahead of the main cluster, in the lead pipe, is the most interruptive of all and requires the smallest tubing of any choice. Putting it in the fourth tubing allows it to be the larger .750” bore for a great low register and keeps it out of the way of the open bugle when not in use. If the one alternate fingering is more important, there is a plethora of instruments already on the market. It is my goal to offer an alternative to what is on the market. I hope it is better but the choice is yours. 2. Building instruments in China: Growing up in Cleveland and discovering CC tuba in the early 60’s, I contacted the local band instrument manufacturer to see if I could purchase one. They told me they had made eleven for Bill Bell and his studio at I.U. but were so far behind on BBb tubas and Sousaphones they had no interest in making something special. Fast forward to the early 80’s, I am teaching Tuba at the University of Akron and am good friends with the design engineer at the same factory. We played in a quintet together. I ask him to build a CC tuba, explaining the benefits to the reputation of the brand. He finds enough parts remaining from the Bell Model to make a sample but the company management is not interested in the small market. Fast forward to the early 90’s. I am now working for that company as a District Manager. They finally acquiesce and make a CC tuba. As a salesman I am kept out of the developmental loop. The tuba goes into production and has moderate success and is discontinued in 2009 because ‘sales do not justify’. An F tuba makes it no farther than 2 proto-types. Such is the American desire to build CC and F tubas. I have experience with factories in America, India, Brazil and China. I find the Chinese to be the most cooperative of all. They are capable of excellent quality as we have demonstrated with Gemeinhardt flutes. I am working to bring the same level to the brass and in the process hope to provide brass instruments of incredible value to musicians everywhere. 3. “Designed in Elkhart, built in China.” is not a slogan, it’s simply an honest statement of origin. I am not simply re-branding instruments made overseas. I am working to create the best instruments I can with designs made in Elkhart. I have sought, and will continue to seek, opinions from players. I am not building instruments for my own use, but instruments for musicians. I do not make changes based on a single player’s opinion. I try to take all input and filter it through my own view of the entire market based on 30 years on the manufacturing side of the business along with my previous professional career. My proto-types are indeed built at the Gemeinhardt factory by a highly skilled craftsman retired from a local trumpet factory and myself. The designs are mine. As an example, the patent for the Dual-Use trombone is mine. The same craftsman inspects the brass instruments in our Elkhart factory and services them as needed. I have traveled several times to China to work with the factories and inspect instruments. We are working together to make our instruments ¬¬¬¬¬¬the best quality possible and the best value you can find. Richard Barth December 2011
Posted by Richard Barth at 11:17 AM 6 comments:

Wisconsin Music Educators Convention October 2011 in Madison.
Pictures on links>
Good comments on new models.
Next stop US Brass Band Open St Charles IL Nov 5, 2011 then
Midwest Band and Orchestra Convention December 15-17.
I will have the F tuba, EEb, CC and new Euphonium along with horns and trombones. 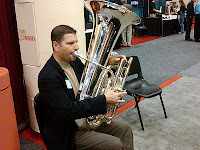 I am just back from the Capitol Tuba Conference and the Texas Music Educators Convention. Some thoughts on testing instruments.

“Kill The Wabbit” is a good test of a tuba.
http://www.youtube.com/watch?v=Yxiv3CBMS4M

I hear it frequently, played well and sometimes not.
May I suggest?
First know the excerpt. Know the fingerings on the tuba at hand. Know the rhythm.
Second don’t test. Or as Mr. Jacobs said, “Make a statement. Don’t ask a question.” Mr. Jacobs said that even when you are warming up on stage before a concert, the conductor can often hear you. Don’t ask a question. Make a statement. Jake was ‘warming up’ before a master class he was giving. He played a few technical things and an operatic aria. Then he said, “You might wonder what I’m doing here. I’m showing off.
Posted by Richard Barth at 12:35 PM 7 comments: 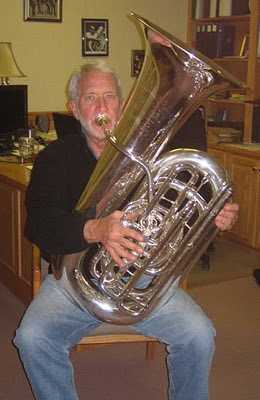 Yes the J-870 is in production. The mouthpipe angle is just like the sample I had in DC and SanAntonio. Milano Music has 2 and three more on order.
Posted by Richard Barth at 12:24 PM 1 comment:

I am just back from TMEA 2011 (Texas Music Educator Convention, the biggest MEA in the country. Everything is bigger in Texas.) Before that was the Capital Tuba conference at Ft. Meyer in D.C., an annual event. Unfortunately I do not get to hear the performances because the exhibit room is busy constantly.
I had on display the J-870 CC tuba in what seems to be the unanimous preferred mouthpipe angle. The only minor complaints I heard were from very tall players who expect the mouthpipe to be low for them anyway. I took pictures of almost everyone who tried it. You can see for yourself in the links.
Comments ranged from “This is the best horn here.” to “This is the best value on the market.” to Is the J-870 CC tuba in production? Is the mouthpipe angle changed? Can I order one? Yes, yes and yes. The J-700 BBb tuba is also in production. We haven’t had as many come through as we would like but they are coming through. The instrument I have been showing at Capitol Tuba Conference and TMEA IS a production model but it is one that had the ‘over-correction’ mouthpipe and was then modified with the final version mouthpipe. I have referred to it as a ‘proto-type’ because it was modified and the solder marks show. I am experimenting with the fifth valve mechanism on this instrument and therefore continue to refer to it as a proto-type. (Sorry if that confused anyone.) You can order one just like it. If you have trouble locating a store send me an email. (rbarth@gemeinhardt.com).
Thanks to everyone who came to those exhibits to try them. Either you were being kind or they were the best tubas on display at those exhibits. I don’t recall anyone who didn’t like them. Pictures are posted under ‘Capitol Tuba Conference…’ and ‘TMEA 2011’.

So here’s the skinny: Orders placed before **(I previously said 2/8)will arrive approximately 9 weeks later. We continue to work on fit and finish and are resolved to travel to Brazil to inspect every instrument.
Weather and Travel have pushed this back. **February 24 is a more likely date.

The J-700 BBb tuba is also in production. I have yet to meet the tuba player who would not recommend this to any school. In fact band director/tuba players often complain that they just bought 6 #$%^&*&^%$#$%^ tubas and would have specified the J-700 had they known about it. Don’t let them make the mistake. Spread the word. And thanks.
Posted by Richard Barth at 9:08 AM 7 comments: