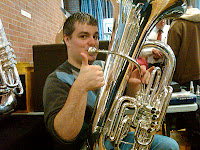 Capitol Tuba Conference at Ft Meyer. There were great performances that I didn’t get to see because I was tending the exhibit.
My sincere thanks to everyone who tried out my new tubas.
And thanks for the kind words. By many accounts the J-445 F tuba was the best F tuba there (and the best of the best were there).
And thanks for the input on the Euphonium. I will be incorporating a few more features in upcoming production.
I’ve posted pictures in the links to the right.

On the way home I stopped in Buffalo where Don Harry and Mark Jones took delivery of their J-445sp F tubas. Their comments: “This is even better than I remembered.” In choosing they flipped a coin. Both horns played the same as the sample they tried a month ago. Don took the proto-type CC to Eastman. Mark is going to use it in the Buffalo Philharmoninc but it will be back with me at the Ohio Music Educator Convention in February. Buffalo has scheduled 2 TWO tuba pieces in the same month! (Strauss and Harris.) 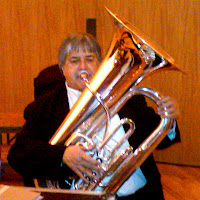